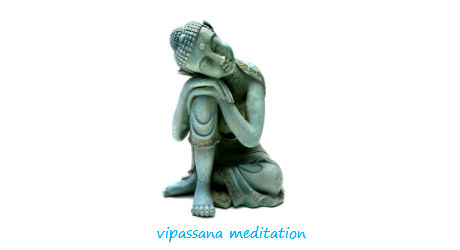 I’m back! Having just landed back to earth after TEN days of silent meditation in Hereford, I’m eager to spill the beans. Yes, I was on a Vipassana meditation course and my, my, was it tough but with mindfulness, consciousness and awareness being such hot topics right now, it’s more relevant than ever to learn what we can learn from these ancient practices.

If you’re not familiar with a Vipassana, it’s an ancient form of meditation (thousands of years old) which aims to ‘purify and quiet a chattering mind’ and by doing so, you can learn to become resilient to the ups and downs of every day life.

It’s only been a popular practise in the west for the last 20-30 years through the teachings of an Indian-Burmese man named S.N. Goenka and in recent years, centres all around the world have cropped up thanks to his desire to spread the word…

The meditation is guided through Goenka’s audio and video recordings. The teaching is about sharpening the mind’s awareness with the ultimate aim of remaining ‘equanimous’ – in balance – to both negative and positive experiences.

It’s not about suppressing emotions, it’s about observing them, watching thoughts come and go, and not being affected by them.

This meditation practice teaches us to be mindful that positive and negative experiences come and go so craving the positive and feeling averse to the negative can only lead to unhappiness. Best to stay neutral and feel balance in mind at all times. A tall order I know!

I’d heard it was hard, but how hard can hard be? I quickly discovered it was no walk in the park – or a bundle of laughs for that matter – it was like a long-distance mental endurance test, every single day. It was even harder than the marathons I’ve run.

Apologies in advance if revealing my experiences spoils it for anyone. I know one of the key reasons the week is spent in silence is so that no one discusses and compares their experiences. What each person goes through is very personal and unique so please bear in mind this was my personal experience and not necessarily what others went through.

The RULES: The ten days of no talking, gestures or touching. No books, pens, phones, music, gadgets, cameras or exercise (including yoga) and no religious practices, rites or rituals. Men and women are separated to also avoid distraction.

The gruelling timetable featured a grand total of THIRTEEN hours of meditation a day. We were also governed by the gong, with the first dreaded gong waking us at 4am and the last one that signals bed time goes at 9pm. Every night I was out like a light by 9:30pm.

I don’t want to spoil it too much for people who want to do the course so I won’t divulge too much about the technique or the experiences during meditation.

We were looked after so so well. I think people imagine a Vipassana is a cold and lonely experience where you’re thrown into a dark room to contemplate life for ten days. That couldn’t be further from the truth!

We were fed amazing veggie/vegan food and the accommodation was clean and comfortable and always heated up to the max, especially comforting when it’s November and blowing a gale outside.

Staff include past students and volunteers, all AMAZING and the meditation hall is so warm and cosy and decked out with all the cushions, blocks and blankets you could need.

There will be many moments and days of despair but these comforts really really do help so well done team Vipassana.

A few of my notes and observations from each day…
DAYS ONE – TWO: it didn’t take long to start asking myself why on earth I was here. How was I going to get through these stupendously long and boring hours and days?  A shell-shocked glaze had rapidly fallen on everyone’s faces as the full extent of the never-ending timetable was sinking in.

People were falling asleep left, right and centre during meditation – heads rolling, bodies jerking and the sound of snoring drifting across the main meditation hall. We were all so unaccustomed to this!

DAY THREE: we’ve been observing our breath going through our nostrils for three days now so everyone was slightly confused. The aim: to quiet a chattering mind. That’s enough reason for me so I kept going. But at one point I sneaked a peak to look around the room and saw strained faces with eyes shut tight, searching for the meaning of life. It almost felt like some kind of gigantic joke!

DAY FOUR: the routine slowly started growing on me and faces around the hall seemed lighter. For the first time I felt like a small weight had lifted and I smiled inside as a new twist to the technique was taught. For the first time also, my mind stopped resisting to the regime and it did in fact quieten down a little. Nice.

DAY FIVE: the new technique hurts! For three hours of each day we spent in ‘Strong Determination’ which means no moving and full concentration on resisting any pain or sensation. No craving to the pleasant sensations and no aversion to the negative sensations – this is the key concept to Vipassana which we’re meant to apply to real life.

DAY SIX: I’m certain athletes, triathletes, marathon runners and ironman competitors would benefit from this practice. Mentally, it’s one of the hardest things I’ve ever had to do but provides great mental endurance training. It was like running an marathon every day! Occasionally tears flooded my eyes from the pain of sitting in Strong Determination but obviously I was determined to get through it.

DAY SEVEN: I felt like I’d turned a corner and my emotions (in and out of meditation) starting balancing, finally! I looked around again and people looked so cosy in their meditation spots. Some had built huge sofa-like constructions,  with multiple layers of block, cushions and blankets. It was hilarious to watch.

DAY EIGHT: uh oh, boredom kicked in! Having felt like I’d sorted my life out, found a new career, fixed my relationship and balanced my mind, I felt ready to go home. What? I have to stay another THREE days? Cripes!!

DAY NINE: I felt like I was climbing the walls with frustration as minutes felt like hours and the hours felt like days. Everything was annoying me and I had no ‘equanimity’, patience or compassion left in me. I was desperate to go home. The only thing that kept me going was the fact that Noble Silence would be lifted at ten am the following day, hoorah!

DAY TEN: I woke up ecstatic! I even hummed in the shower with a cheery glow inside and counted down the minutes until we could talk again. I’d been dreaming of this day all week!

I know I’m painting a picture of resistance, difficulty and pain (because it was a bit like that at times) but there are also MANY rays of light throughout the week:

The teachings of S.N. Goenka are hugely positive and inspiring. Each video and audio recording left everyone with a rosy, warm glow and a new, more harmonious perspective on how to live life.

When ‘Noble Silence’ was lifted, everyone hugged and cried – it was an emotional week and the (silent) bond you create with people is strangely strong. There were also two pregnant girls there who were a massive inspiration to us all. Could this be a new trend for expecting mothers?

Anyway, I’ve gone on too much and so sorry if I’ve spoiled it for anyone wishing to go. If you’d like to know any other details please pop your comments below – or read more at the Dhamma Dipa Vipassana site – and would be great to hear from anyone who’s also done it.  Thanks for reading. xx

I’m Yanar, a health and fitness editor and this is my collection of thoughts and inspirations on sustainable living, health, fitness, wellness and more. Read about me here.