I was at a Massive Attack gig in London’s Brixton Academy last week and through LED light projections, visual art and photographic images the British band channelled messages about the Syrian war, refugees and humanity in general. Using powerful photography from photojournalist Giles Duley, they captured attentions and moved emotions. At the end of the gig Massive Attack invited donations to UNHCR – the United Nations High Commissioner for Refugees.

I’m glad Massive Attack chose to use their platform to project these images and messages. Who cares if some people think we shouldn’t see and hear the hard truths and realities of humanity’s struggles at a music gig. It’s important we don’t forget what’s happening or turn a blind eye.

Here are a few snapshots from the night with a link to donate at the end. 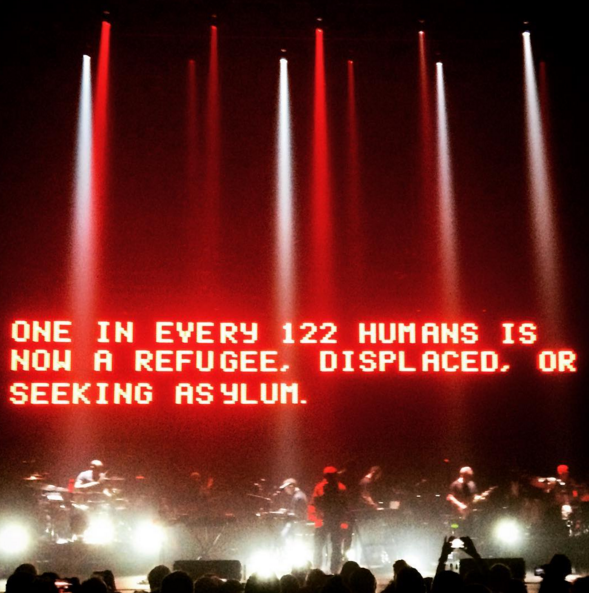 Photographer Giles Duley, who was seriously injured in Afghanistan a few years ago (he lost both legs and an arm but miraculously recovered and returned to work as a photographer). On the UNHCR website he explains how his work ended up as a backdrop to Massive Attack’s European tour:

“I was in Lesvos last October and the scenes there were overwhelming. In all the time I’ve worked, I’ve never seen such emotion and humanity laid so bare as I witnessed on the beaches of Lesvos.

One of the first emails I sent was to the guys in Massive Attack. Seeing such events, I felt so powerless, I needed to do something. At that stage I had no idea how the collaboration would work, but I knew the band would want to act.

Within minutes of seeing the images, they had replied to my email. As with me, they were shocked that this was Europe, this was now. So when they suggested using the images during their European tour it made total sense – as they played in Europe, they would be showing the scenes that were occurring all around us.”

See more of Giles’ work at gilesduley.com and donate at unhcr.org

I’m Yanar, a health and fitness editor and this is my collection of thoughts and inspirations on sustainable living, health, fitness, wellness and more. Read about me here.

Prepare for the unknown... ⚡️⚡️⚡️
Patience with progress ✨✨✨ Barbell conditioning #Week2
“The interests that keep us curious, engaged and sane will likely only whisper their desire to be a part of our plans. Listen hard, include them. You might find they’ll not only support you, but encourage and strengthen connection, too.”